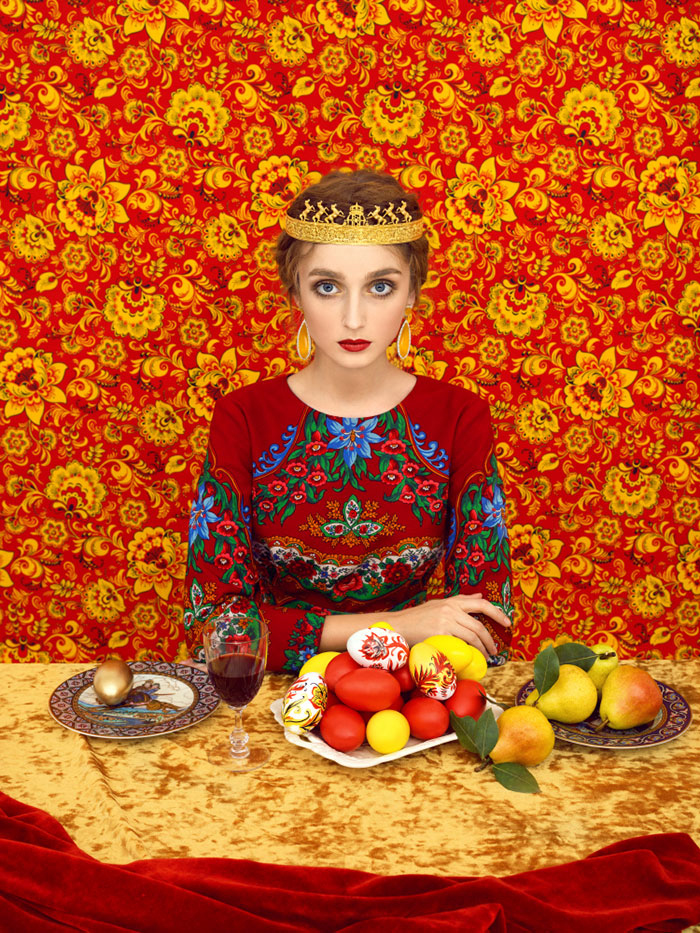 Land of the Firebird

All this talk about Russians and the election has had me thinking about Russia again. I am obsessed with Russian fashion and history and contemporary art.

When I was in college I took a course called Russian for Chemists. I majored in chemistry and at the time, during the Soviet era, not a lot of scientific papers were translated into english, so we were learning the language in order to read them. I even dated a Russian for awhile, he didn’t speak english at first and I got to practice my Russian. The more English he learned, the more I learned that he was really not the one for me.

I started reading more about the history of Russia (then the Soviet Union) and reading the folk tales, about Baba Yaga the witch who had a house that ran on chicken feet, and Beautiful Valsilisa who had a magic doll that she fed milk. I got hooked. There is a wonderful book called “Land of the Firebird” by Suzanne Massie which paints a magical picture of the Beauty of Old Russia it is a good place to start.

Every year we go to Brighton Beach to wrap ourselves in blankets and have some blinis with caviar and vodka on the boardwalk. If you haven’t gone, you must. Best people watching in New York City. Recently I learned that you can get discount botox there, if anyone has tried it, please let me know (Boris, please pass me the Botox). There is an amazing grocery store called Gourmanoff that has valet parking and chandeliers. It is a great place to pick up a picnic lunch if you are visiting the beach and should be a destination for any foodies.

Up until the time of Peter and Catherine the Great, Russia sought to isolate itself from the western world and looked inside for inspiration. What was created was a magical, fairy tale inspired world that evoked passion, mystery and romance.

In medieval times, Russian women put black die in their eyes and painted round dots on their cheeks. Imagine these pale faces with huge, alien like eyes and elaborate gold head dresses. Sadly I couldn’t find any references on the interweb, not everything is online.

At one point in history, there were so many Muslim people in Russia that there was a vote whether to join Christianity or Mohammad. That was when the Russian Orthodox church was formed. The irony of Syria.

There are some fantastic Russian artists who create haunting pictures that show the rich colors and history of old Russia.

Take a look at some of these haunting images. So much color. It makes my eyes sing. I can’t get enough of these.

Imagine a wedding styled in these vibrant hues that takes place in a dilapidated venue. The bride wearing a kokoshnik, a traditional Russian head dress. Lots and Lots of saturated, jewel tones.

I think that would bring the term “Rustic Chic” to a whole new level.

Imagine these colors at a place like 1896 in Bushwick, at The Foundry in Long Island City or at stark white Studio 450.

I would love to see brides wearing red or cobalt blue for their wedding. What a great statement that would make. White is supposed to represent the virginal bride. As if. Really?

I think that women should look glorious on their wedding day and these pictures are really inspirational.

Check out the gallery below.